Having our first Aggie, there were some things we have learned.  This advice you will not find on Pinterest! For you parents on the hunt for Christmas gifts, you can read some of this list as an Aggie Holiday Shopping Guide.

1.       The Yeti Cooler- This is the iPhone 5 of coolers.
If you whip out a yeti cooler, you are noticed.  Its like pulling out your new iPhone and everyone asking,  “is that an iPhone 5?” They are blowing up wedding registries all over College Station and will probably sell out this Christmas. Ladies, if you want to hold on to your man, show him some love and buy him a cooler he won’t be embarrassed to prop his boots on. 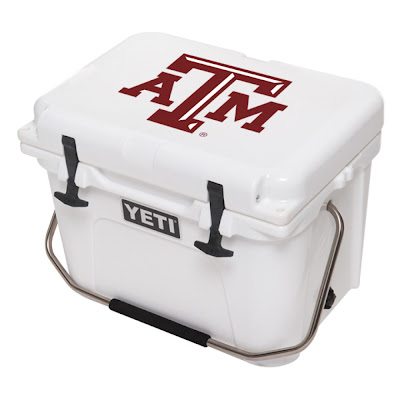 2.       Wranglers and Levis - these are real jeans.
Do not show up in College Station with a pair of 7 Jeans.  You might as well show up wearing a Tutu.
3.       PFG - the Prada of A&M.
A PFG (Performance Fishing Gear) shirt is like the blankie or stuffed animal you had as a kid and could not live without.  Your PFG shirt goes with you on all your adventures and stays with you throughout life.  You wear it, and it reminds you of every hunting trip, fishing experience, or adventure you have had in it. It is like wearing your very own, grown-up security blanket. It also happens to look good on every Aggie from 18 to 85. Also, if a girl on campus is wearing one, it means she is taken. 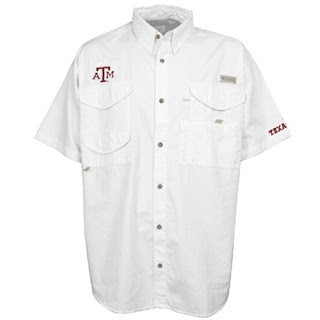 4.    If your truck is not a 4x4, you are a “poser.”
At A&M your truck must have 4-wheel drive or you might as well be driving a smart car. But make sure your truck will fit in your dorm’s parking garage. At some dorms, several students have to park down the street because the garage can’t handle a muddy 4x4. They must have been designed at UT.
5.       A pair of cowboy boots- ladies these boots are not allowed to come from Nordstrom’s or Macy’s shoe department and Frye is not an acceptable brand.  They must come from a real cowboy store (which isn’t too hard to find in College Station).
6.       Chilifest - College Station’s own ACL Festival. Help charities, eat chili. Sounds like my kind of party.
7.       No ordering late night pizza, you order Pizza Rolls.
From what I hear, Gumby’s serves the best. You choose it – BBQ Sauce, Ranch, Garlic Butter, Bleu Cheese, or Buffalo Sauce. You can worry about the quadruple bypass tomorrow.
8.       Every Social Media post will end up being turned into a football conversation.
My 20-year old daughter went to visit her brother at A&M. She wanted to take him out to dinner since he has been eating at the dorm or from a vending machine. I went on the Internet to find a place for Italian food. I avoid YELP because the reviews are canned, so I look for independent sources.  Every College Station restaurant review had one thing in common; it starts out as about food but ends up about the SEC!  After the Alabama game, the only topic worth discussing online is football. But really, what else is there?
9.       Bow ties – is Dr. Loftin setting a new trend at A&M?
I had not seen one in years until I went to an event at College Station and saw a few young men wearing them.  Bow ties are like good manners; you always appear to be smart if you have either. I don’t know what it is, but I just feel more comfortable with my daughter dating a man who can tie his own bow tie. 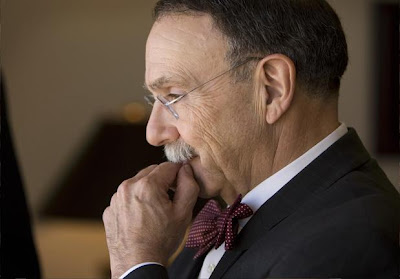 10.   Vending machines are a source of nourishment.
I took a peek at my son’s bank statement a few weeks ago and thought his debit card had been stolen. And then I figured it out. At A&M, the vending machines take ATM cards and many a student uses this has their main source of food.

Please feel free to add any advice that you have.  This is meant to be light-hearted and fun.
Posted by Unknown at 11:58 AM 4 comments:

The Beach House You Didn't Know You Were Paying For

I have first hand knowledge of what John Englander is writing about in his book High Tide on Main Street.  As a real estate broker and property owner in Galveston, Texas for the past 20 years, I have seen homes 2 blocks away from the ocean become beachfront property. The joke in many beach towns is “buy 3 blocks from the ocean because within 10 years you will be beachfront.” The same thing is happening in Florida and all other states that have a coastline.  What John Englander is talking about in his book is not a description of a possible future in a far away land; he is talking about here and now.

Where a homeowner once had a prime piece of beachfront property, they now own the land the waves crash over. It is real estate litigation at its worst: the government against the homeowner determining who now owns the land.

The post-Sandy reality for many families will not be a question of when and where to rebuild but be a no-rebuilding-allowed option.. The physical displacement of the coast and the homes that once stood there is heart wrenching, but they make up only one side to this story. 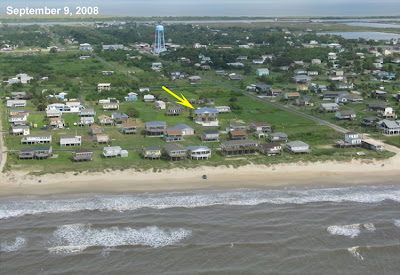 There is the obvious economic side of rising waters and natural disasters, and this is the side of the equation that gets touchy. If you don’t live in one of these areas, you have to ask why anyone would take the financial risk of building in an area that could flood.  The answer? The government encourages it with your tax dollars. You and fellow taxpayers are the ones paying the bill. You see, taxpayers are subsidizing a stranger’s luxury of having a home on beach or that lake front view. These homes are insured by the Federal Government through National flood insurance programs, and in some states like Texas, they are further insured with state taxpayer subsidized plans called Wind Insurance policies. Both are available at a hugely discounted rate. Why is the government in the insurance business?  Because Insurance companies would never take such a high risks because they know there is no question as to if they would have to pay. They are just watching the weather channel, waiting for the next big storm, and are glad they don’t have to pay pick up the tab. 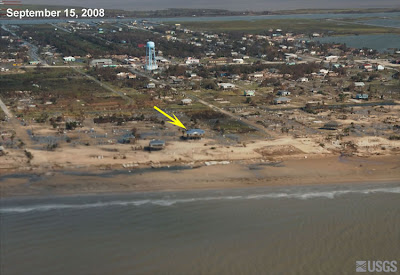 So why have the values of these properties that are prone to hurricanes and flooding not gone down?  Well, the answer is: it depends.  If you are in an area that is subject to flooding and requires the federal government to insure your property, values are typically less.  The exception to the rule is beachfront property.  After each natural disaster, the supply of these lots diminishes, and when you are wealthy and the federal government is subsidizing your insurance, you are in a no lose position.

Why should the taxpayer, a group made up of all income levels and property owners, continue to subsidize insurance for extremely high-risk real estate, commonly owned by the wealthy? ABC News Commentator, John Stossel, compared the Federal subsidizing of coastal properties with subsidizing car insurance for drunk drivers. Not only do the government’s policies seem to reward hazardous living, but have consequently encouraged it to the tune of $645 billion in federally insured and guaranteed property. If you, as a taxpayer, have ever dreamed of investing in high-end property along the beach, your dream is now a horrifying reality. You have been paying to insure millions dollar properties for years. The federal guarantee of insurance does more than simply foster the increase of coastal living and home building among the elite, it is an economical boomerang that will inevitable come back to hit the government where it hurts…your pocketbooks!, The problem is the government’s National  Flood Insurance Program is broke, and their credit line is almost all used up. Because of this, premiums are set to double over the next 5 years.  Those that have this insurance complain about the cost, but it is a bargain compared to its cost on the open market

As these premiums go up, the effect will be felt in the non high-end properties, making there values decrease. A $1000 premium increase in insurance does not affect the $2 million dollar home but does effect the $250,000 home. And if the Federal government ever decides to get out of the insurance business, these properties will instantly drop in value. It will be the equivalent of owning property with toxic waste.

As John Englander has pointed out in his book, High Tide on Main Street, we are seeing more flooding with less severe storms.  A category 1 storm now floods an area like category 4 hurricanes did in the past. Why? Because higher storm surges go along with even the tamest weather. If Hurricane Katrina, Ivan, and Ike aren’t sufficient proof of the power of storm surges, Sandy is the poster child. Storm surges will only get worse as sea levels will continue to rise. We are seeing properties that had never flooded now suffering every 2-3 years. The values of these properties will continue to decline, and more and more areas will be zoned in the flood plain. And once they are in the flood plain, they never come out!  Properties in flood areas have two huge issues going against them:


As Englander states in his book, “ PROPERTY VALUES WILL GO UNDERWATER LONG BEFORE THE PROPERTY ACTUALLY GOES UNDERWATER.” 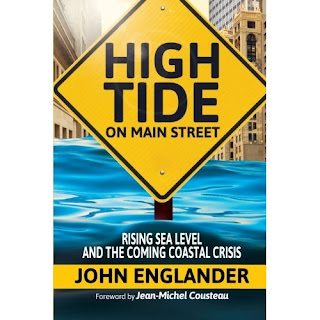 II was curios why cities and states don’t do something to prevent or try and minimize the flooding.  They can’t control the sea level so why not try and reduce the damage. Most municipalities after a storm like Sandy are so concerned with getting life back to normal that any future planning for prevention is put on the back burner. After storms and floods, infrastructures are repaired in the fastest possible time table with little thought to the future.

After Hurricane Ike, Galveston, Texas realized they had to do something.   They spent over $250,000 studying prevention plans and for a city of 50,000 that is a huge expense. These studies developed in a proposal to build the “Ike Dike” to reduce storm surge impact on the island. After Sandy, Galveston no longer believes it will be a recipient of any protection from future storm surges because the federal government will protect more ‘valuable’ cities. Why should local govt. invest in research that the fed will use to protect other cities?  They can’t afford it.

While the current news about Sandy is all about meeting the basic needs of East Coast residents, in a few months, a new issue will be making headlines. It is an issue that most southern coastal states have had to deal with because of the hurricanes in the past years: the rising tide.  The tide rising is not something in the far distant future; it is here.  The infrastructure and prevention side needs to be addressed because the affects on homeowners are already being felt.
Posted by Unknown at 11:36 AM 6 comments: